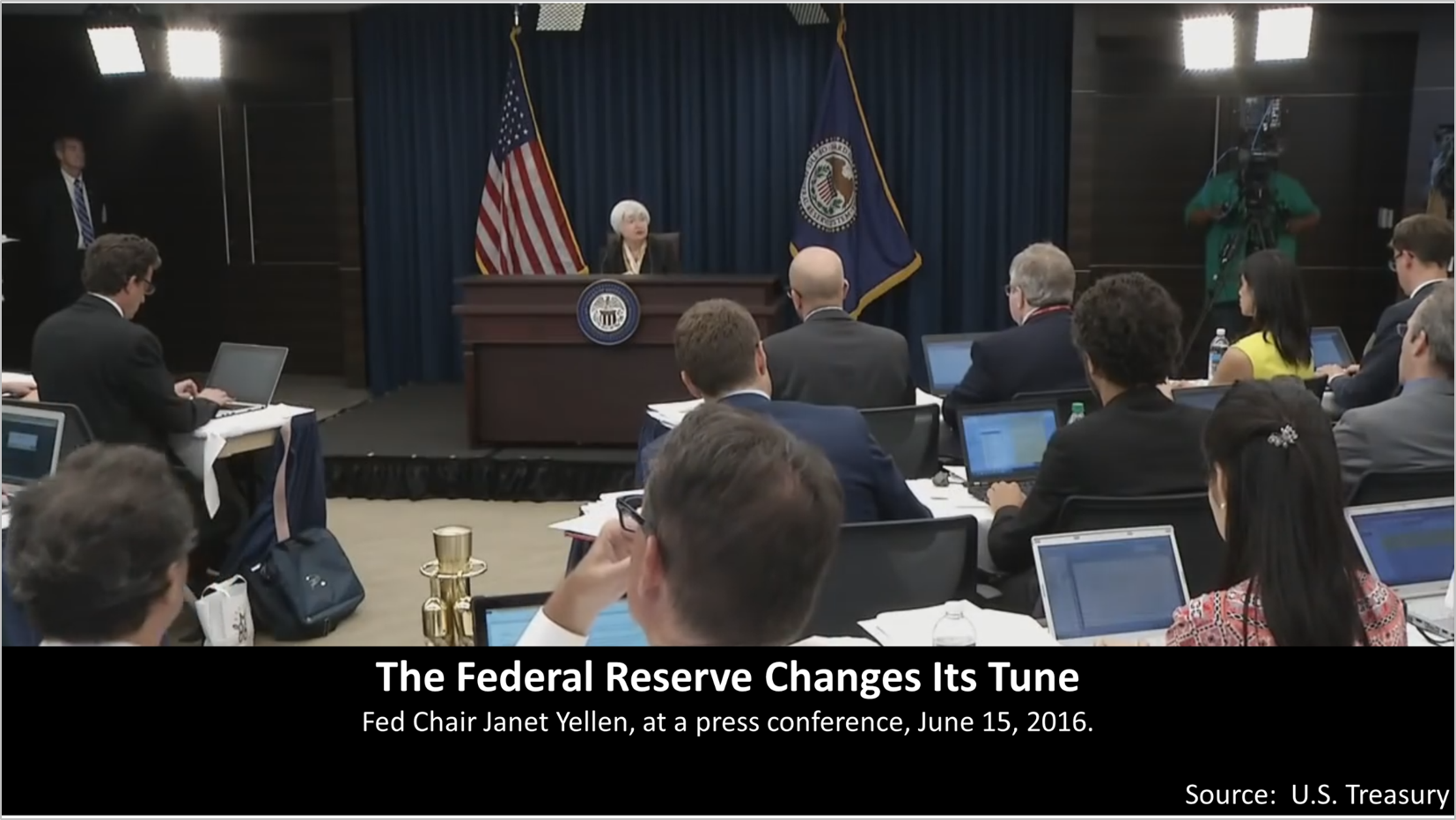 Stocks lost 1.2% in the week after the U.S. Federal Reserve Board slightly lowered its forecast for the U.S. economy. "Recent economic indicators have been mixed, suggesting that our cautious approach to adjusting monetary policy remains appropriate," the Fed chairwoman, Janet L. Yellen, told at a press conference. 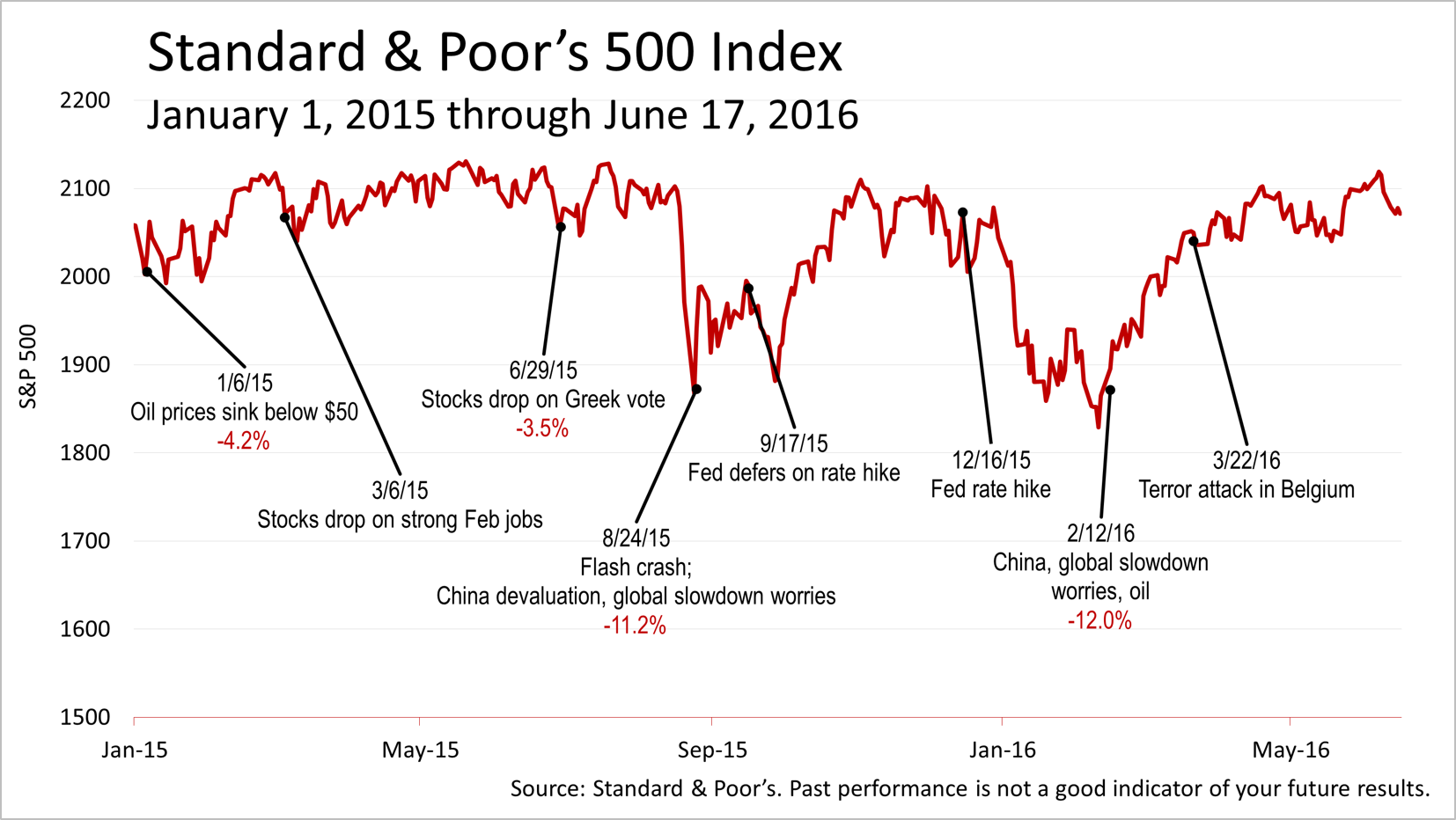 The Standard & Poor's 500 index dropped about 1.2% last week to close on Friday at 2071.22. Considering the cautious tone of the Fed chair's remarks about the economy, a 1% pullback in stock prices is not as bad as you might expect. 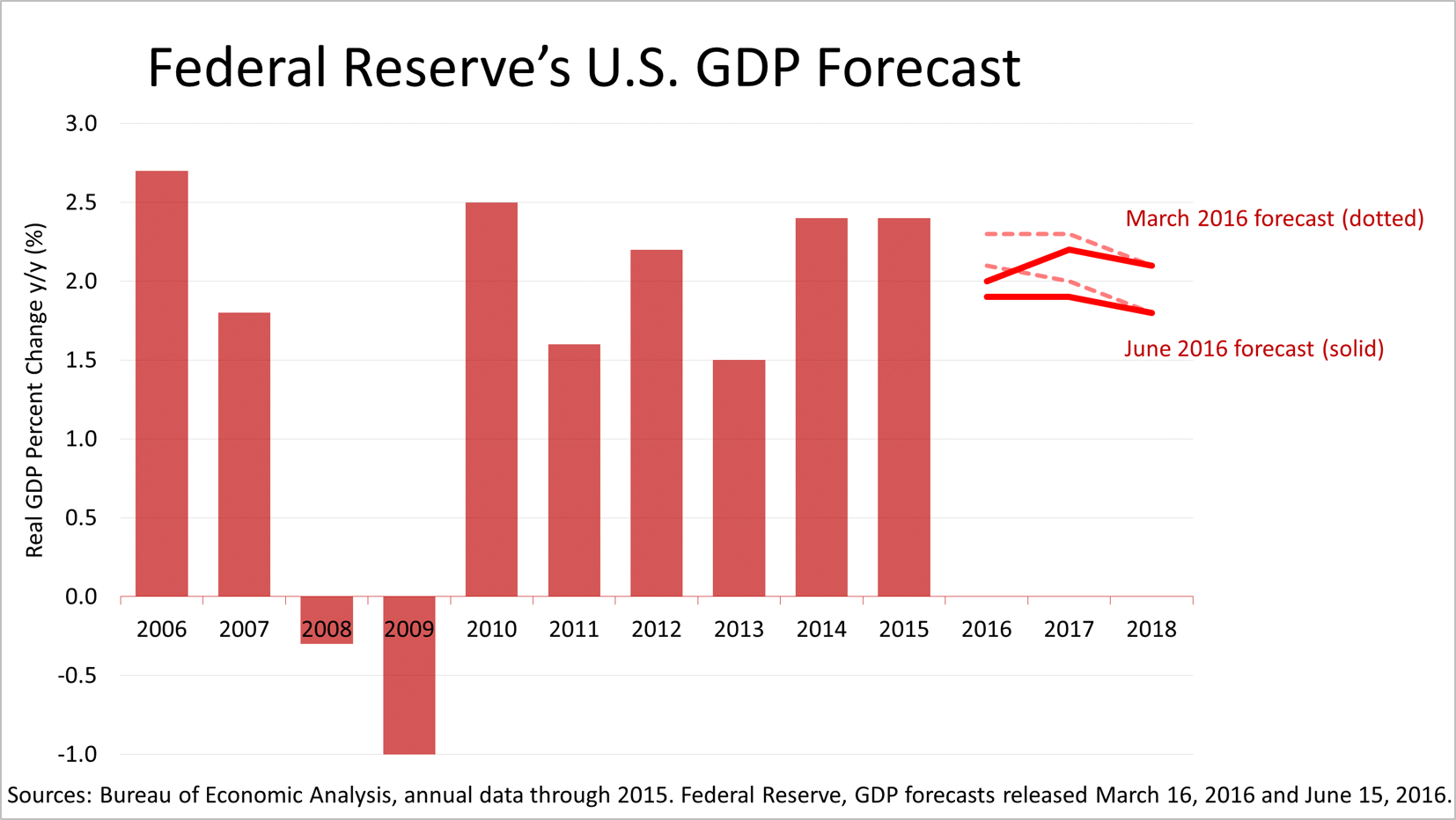 The Fed slightly trimmed its U.S. Gross Domestic Product forecast from March. The Fed forecasts an upper and lower band for GDP growth. The two dotted lines in the chart above represent the March 2016 forecast by the Fed and the Fed's June 15 forecast is the solid line.

In slightly lowering its growth expectations, Ms. Yellen's comments at her monthly news conference suggested the nation's central bankers are rethinking, and they have downgraded the likelihood of another interest-rate hike this year. 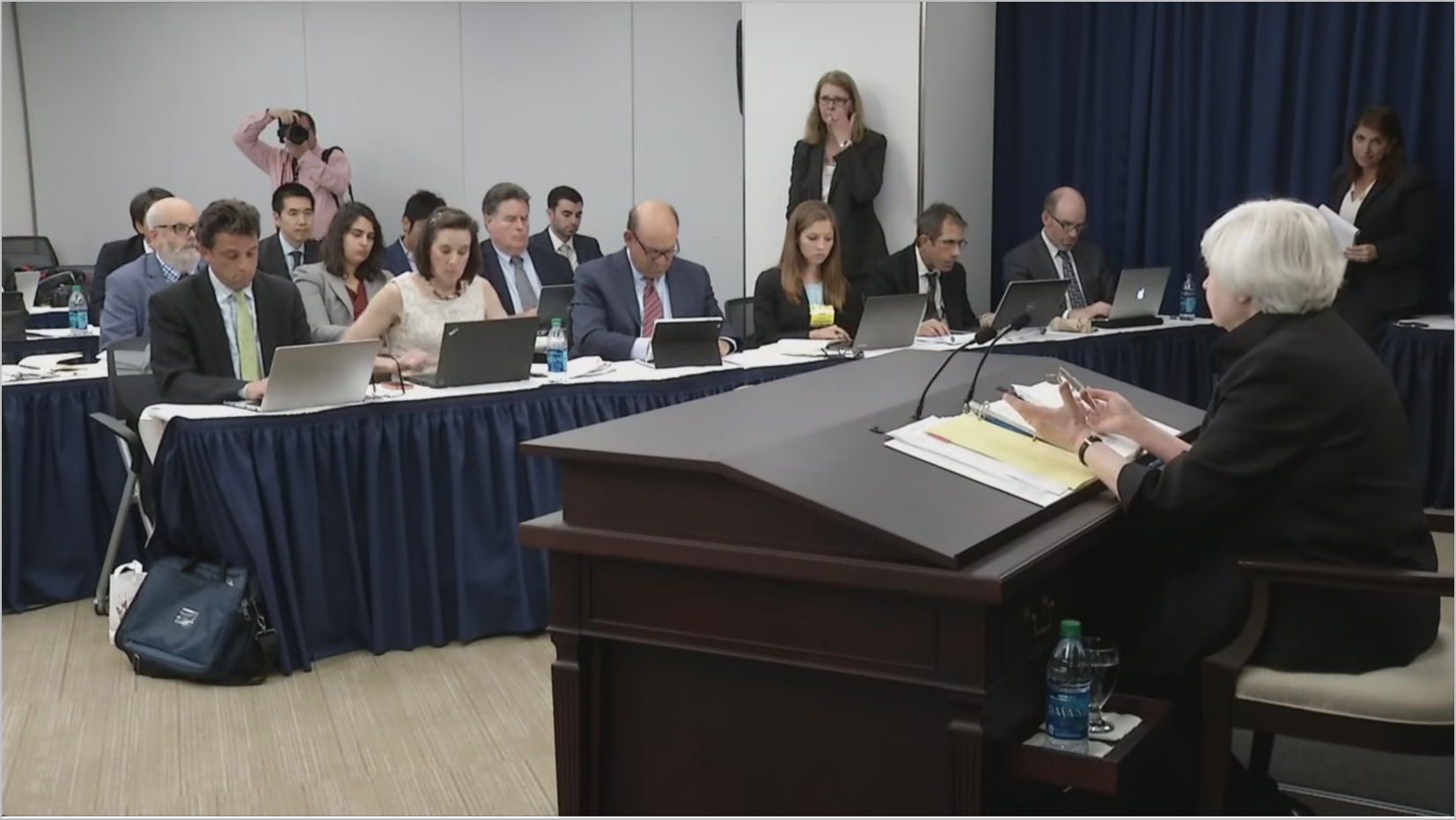 At the June 15 press conference, Yellen said the economy was still healthy, but new jobs are being formed at a slower rate, as the economy has approached full-employment.

"The (Federal Open Market) Committee currently expects that, with gradual adjustments in the stance of monetary policy, economic activity will expand at a moderate pace and labor market indicators will strengthen," Yellen said.

However, Ms. Yellen's tone was different than in press conferences in March, when the Fed chair had indicated an interest rate hike was possible as early as June. 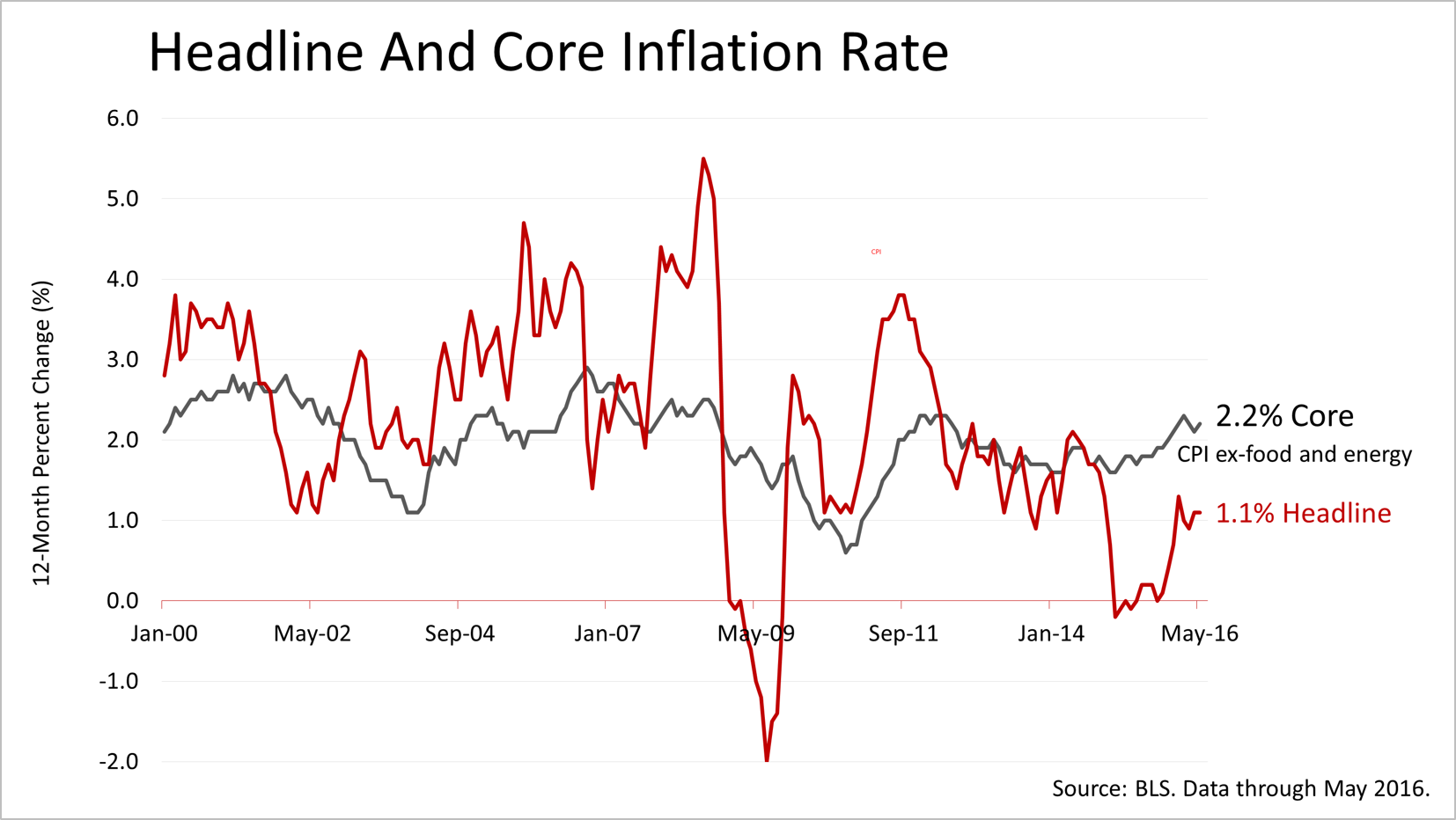 The other key piece of data released this week past was the Consumer Price Index for May 2016. The headline figure showed an inflation rate of 1.1% over 12 months. However, excluding household expenses for food and energy, the "core inflation rate," was reported at 2.2% for the same 12-month period. The widely followed CPI is masking the inflation rate because of weakness in gasoline prices, but CPI is not the key inflation indicator used in policymaking by the Fed. 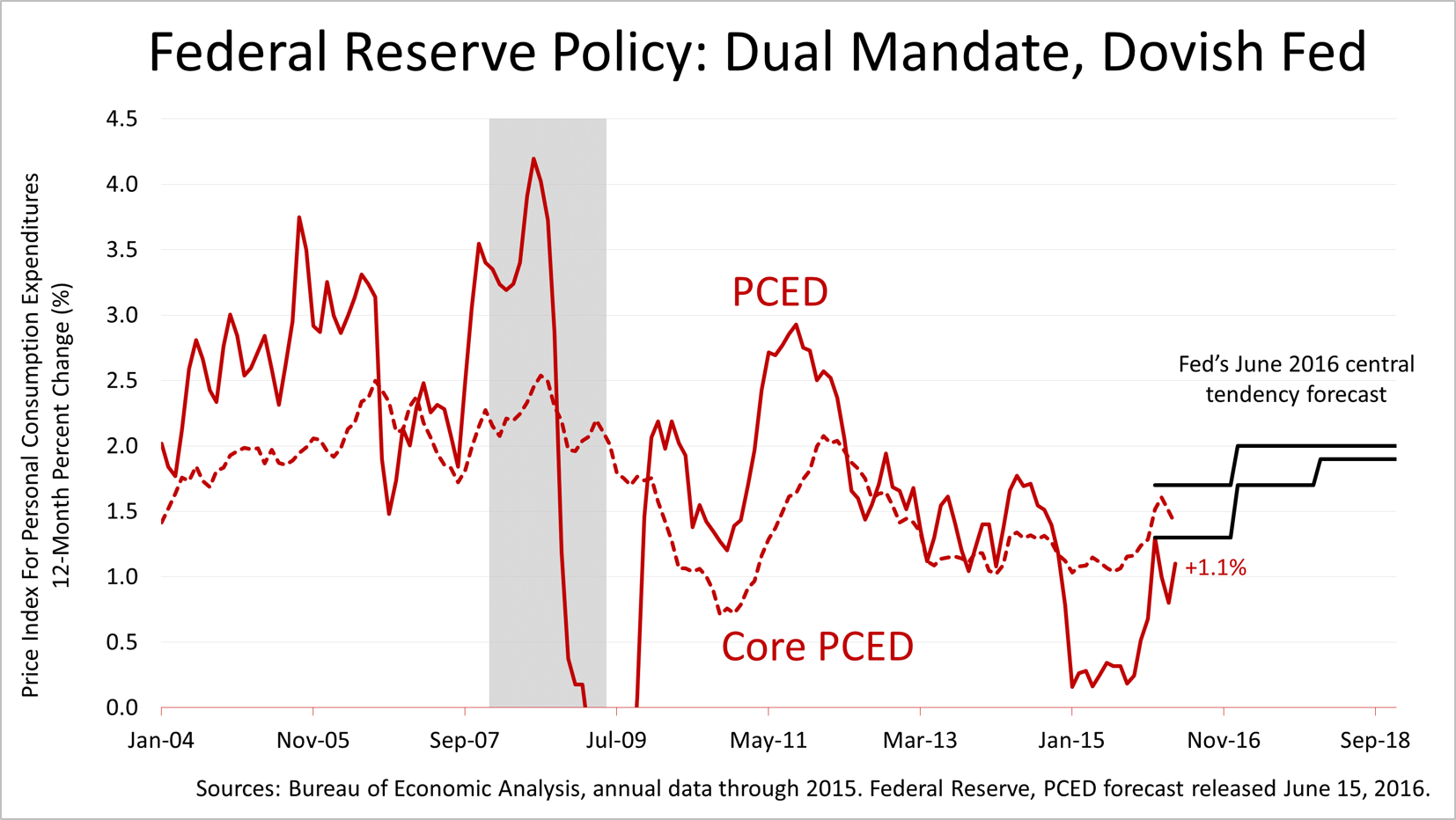 This chart shows the key measure of inflation relied on by the Federal Reserve in making policy. The Fed measures inflation using the personal consumption expenditures deflator (PCED).


The black lines on the right side represent the upper and lower bands of the Federal Reserve's inflation expectations through the end of 2018.

The PCED is recording lower inflation readings than the CPI. The headline PCED figure is 1.1% year-over-year through May 2016, but the core PCED is just 1.4% for the same period.


This forecast remained unchanged from March, and shows an expected upward trajectory back towards 2% inflation by 2017. The Fed has been consistently high in its inflation forecasts since 2011. So the 2% forecast by the Fed should be viewed cautiously.


Despite the cautious note struck by the Fed this past week, the economy overall remains on moderate growth, as it has been throughout the six-plus year-old expansion.


This article was written by a veteran financial journalist using data compiled by Fritz Meyer, an independent economist. While these are sources we believe to be reliable, this information is not intended to be used as financial advice without consulting a professional about your personal situation. Indices are unmanaged and not available for direct investment. Investments with higher return potential carry greater risk for loss.